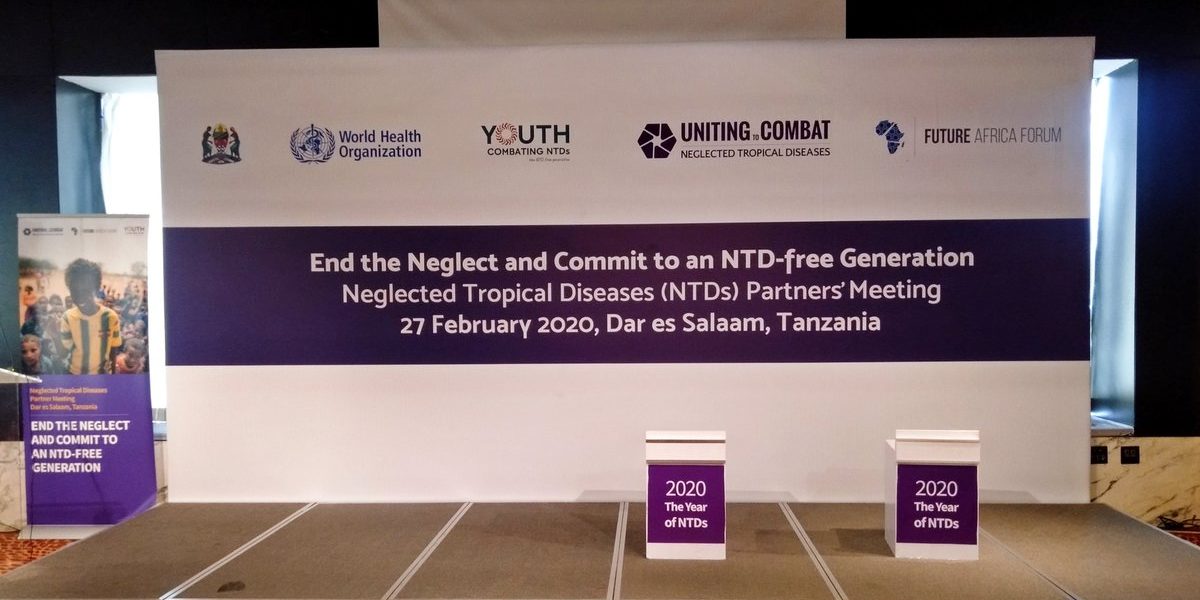 The global End the Neglect and Youth Combating NTDs announcements were featured during a high-level briefing on NTDs in partnership with the Ministry of Health, Community Development, Gender, Elderly and Children and World Health Organization in Tanzania. Both the campaign and youth movement aim to end the neglect of these debilitating diseases, and to make the invisible, visible – from over 1.5 billion people affected by NTDs, to the youth voices all too often left without a seat at the decision-making table.

The global movements aim to galvanize support around several high-level opportunities for NTDs in 2020, particularly around the launch of the WHO 2021-2030 road map for NTDs at the world’s first Global Summit on Malaria and NTDs in Kigali, Rwanda, on 25 June 2020, alongside the Commonwealth Heads of Government Meeting. To sustain gains and accelerate progress on NTDs in line with the Sustainable Development Goals, the road map will offer a fundamental shift to focus on countries, communities and people at the centre.

“Our new 2021-2030 roadmap calls for a multi-faceted approach that focuses on the engagement, involvement and contribution of everyone for better cross-sectoral action,” said Dr Mwelecele Ntuli Malecela, Director, WHO Department of Control of Neglected Tropical Diseases. “I welcome the ‘Youth Combatting NTDs’ initiative and look forward to working with the younger generation towards a world free of these diseases of poverty”
NTDs are a group of 20 debilitating infectious diseases that disable, disfigure and sometimes kill. Thriving in areas where access to healthcare, adequate sanitation and clean water is limited, NTDs keep already disadvantaged children out of school and adults out of work, subsequently trapping communities in endless cycles of poverty and costing countries billions of dollars every year in productivity gains.

“This is the decade to put an end to diseases of poverty and double down on the fight against NTDs,” said Mrs Thoko Elphick-Pooley, Director of Uniting to Combat NTDs. “With the launch of End the Neglect, we are starting a global movement to educate and inspire people to take action on these preventable and treatable diseases. We are also thrilled to announce our campaign alongside Youth Combating NTDs, a vital initiative putting young people at the front and center of the fight against these diseases.”

Through 2020, End the Neglect will call on global audiences to learn more about NTDs and the people they impact and to amplify voices on social media, in turn empowering others to take action. The campaign will also encourage participants to sign a petition urging world leaders to mobilise US$1.5 billion towards the total cost of delivering the WHO 2021-2030 road map for NTDs.

“We are excited that Future Africa Forum got the opportunity to partner with Uniting to Combat NTDs in launching this youth movement,” said Gerald Chirinda, Founder of the Future Africa Forum. “Given that NTDs affect over 1 billion young people globally, it is only right that as young people, we are actively involved in fighting NTDs, as we believe there is nothing for the youth without the youth. This movement gives us the opportunity to begin mainstreaming the participation of youth in the NTD community.”

Youth Combating NTDs is designed to encourage the participation of young people in the fight to beat NTDs. The initiative will equip and strengthen young advocates and leaders with the necessary resources to amplify their voices and effectively shape policies to end NTDs in their communities. As the digital space is key for mobilizing Millennials and Generation Z, the group plans to leverage social media to raise awareness of NTDs, and engage and activate the global youth community.